The Law is still an Ass

I’ve never been a big fan of lawyers, though I’ve always maintained professional respect for the ‘learned ones’. That particular phrase, ‘learned ones’ is precisely the reason I retain a secret sense of disgust for lawyers. Even first-year law students are seen to wear an air of pride around them, sort of an irremovable halo that bestows special powers on them. I was never going to be a lawyer; I never had the stubborn argumentative spirit that convinced our parents that a child was destined to be a lawyer. Thinking of it now, how would one assume that a child’s obstinacy qualified them to be arbitrators or advocates? Weird!

However, my deep appreciation for lawyers stems from the supposed volume of work that they are expected to consume in the process of legal training; five years of undergraduate study, 12 months of Law School training and a long tortuous journey to the top of the profession. It seems like a really arduous task, considering that there are several books to be read, cases to be studied, sections of the constitutions to be memorized and historical cases to be internalized. For the life of me, I simply cannot comprehend how a student is expected to learn so much about company law, corporate law, tax law, oil and gas law, banking law, land law, tort, legal thought and God-knows-what-else, and still maintain a balanced social life.

In the process of obtaining a Masters degree in Public Administration from Syracuse University, New York, I sat for one class in Public Administration and Law with David Crane, former Chief Prosecutor for the UN war crimes tribunal in Sierra Leone. Maybe it was the fact that I was highly impressed with Professor Crane’s achievements in the field or the fact that he maintained the demeanour of a highly experienced army general; tough enough to indict a sitting president, Charles Taylor, of war crimes, yet soft enough to remind his class on the first day that the most important duty a person could have is to take care of their family. David Crane made me feel comfortable with reading and analysing ten landmark legal cases in ten days, including some of the most difficult cases the US Supreme Court has had to consider; he made me take the witness stand before my peers in a simulation of a real case of wrongly firing an employee in the US Civil Service; he made me serve as an advocate for the US Army defending the practices of the military in faraway Germany, and more importantly, he made me appreciate the hard work that goes into administering justice every single day in diverse corners of the world.

But how much justice really is justice? How blind is the famous lady with the light strip of cloth covering her eyes? How balanced is that rusting scale tossed around by snow, hail, rainfall and sunshine? I have come to realize that the law is extremely subjective and heavily dependent on the individual interpretations of really complex material and the convincing ability of those who dare to decipher its content. Miscarriage of justice is all too common in the legal world and even lay people are beginning to realize that lawyers and judges are not superhuman after all.  Every individual seeks available loopholes in carefully worded constitutions that were drafted by fellow humans, and exploits them to their own advantage. How else would one explain the fact that there are legal arguments that could ensure that a serial murderer does not suffer the same fate as his victims, because he purportedly suffered a nervous breakdown after a stressful period of hard work? Or how could one justify the confinement to juvenile prison of a poor 12-year old child who picked up a church bell in the course of his play? The difference lies in the access that each person has to a skilled advocate as well as the ambiguities that can be exploited.

The Nigerian legal system does not get any props from me because I don’t see much of a difference between law and politics in Nigeria. The same principles that govern the election of criminals to public offices dictate the administration of “justice” by the “learned” members of the society. The prevalent spirit in Nigeria is that of intentionally subjugating the helpless while glorifying the bourgeoisie. In Nigeria, there are several petty criminals who are languishing away in prisons awaiting trials for goats they stole 22 years ago, while thugs who brazenly looted public treasuries time and again are awarded chieftaincy titles and granted diplomatic passports to represent 160 million people in Shenzhen countries. Patriots who have routinely defended the poor and powerless are denied worthy honours while miscreants with no record of meritorious public service are accorded national distinctions and honorary degrees from our educational institutions.

Charles Dickens is credited for the much publicized use of the phrase “the law is an ass”, when Mr Bumble in Oliver Twist states that “if the law supposes that your wife acts under your direction, then the law is an ass – an idiot…” The law definitely is not all that we wish it is or that we make it out to be; the law is not perfect, the law is not impartial, the law is not devoid of controversy, and the law is not entirely satisfying. The law does not actually resolve conflicts; it only quietens them for a while until they are revived by other personalities. Murder cases cannot be resolved by straight-jacket verdicts, robberies and burglaries are hardly settled in courts, taxes are evaded even by lawyers, contracts are broken, then re-signed and then broken again, and how on earth could divorce courts ever attempt to settle matters of the heart? Do judges ever have perfect marriages that qualify them to decide for a couple that got engaged in secret that their hearts deserve to be separated in public? Who contends that the law is an ass? All the law needs is a really good kick in the belly and off it goes galloping into the sunset; leading the powerful in the direction of their dreams and silencing the hopes of the defenceless forever. 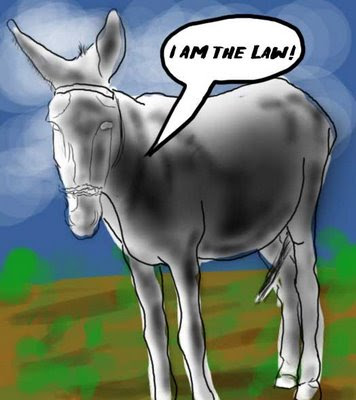