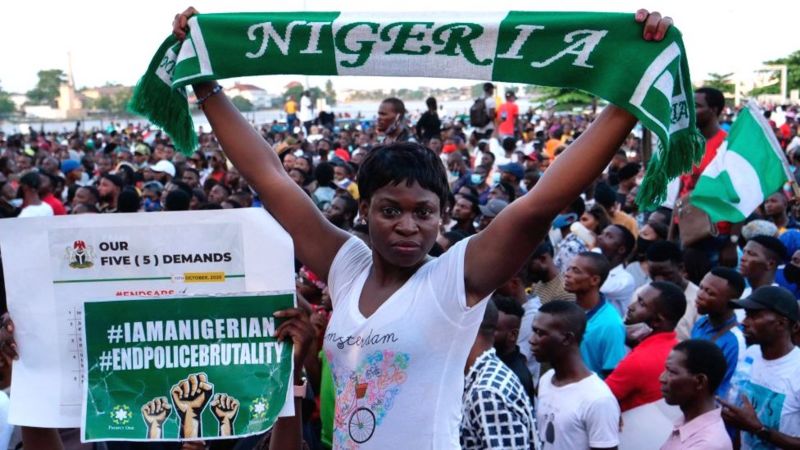 I am writing this open letter to you, not because I believe that you will be concerned by the words of my letter, but precisely because I expect that you will not be bothered by them. In a season such as this, where many words have been spoken, one wonders if there is any merit in saying much more, but for the sake of our nation and for posterity, I write.

Like many others, I observed with pride over a near two-week period as Nigerian citizens in my generation thronged the streets in several cities, within and outside Nigeria, to demand fair treatment by the Nigerian Police force and good governance in Nigeria. I was proud to see committed Nigerians, young and old, of all tribes, socio-economic statuses and educational backgrounds. Unlike public protests of the past, these sets of demonstrations were fuelled by hope and powered by unshakable love for our country. These peaceful demonstrations united Nigerians at home and abroad and many of us dared to dream that this time will be different – that we could help to birth change in our nation. We were enthused to see that your government and several state governments swung into action with the announced disbandment of the Special Anti-Robbery Squad (SARS) and the constitution of committees for redress at the state level. We were gratified by the sense of dialogue that was ensuing between governments and citizens, but something was glaringly missing – you, Mr. President were not speaking to us directly.

Many of us felt uneasy when we saw the video of your interaction with the Lagos State governor, Mr. Babajide Sanwo-Olu, in which you chuckled when he broached the subject of a trust fund for victims of police brutality. It appeared to be at best a disdainful response to what was a legitimate concern. One wondered if we shared the same sense of unease about the crisis that has festered in our nation for several years unchecked, but we did not take it to heart. Mr. President, we thought that perhaps you genuinely cared, but you were taken aback by the Governor’s comment. However, your silence over the ensuing days gave us ample reason to doubt whether you had any understanding about the seriousness of the issue at hand. We expected that the leader of our nation will not ignore our pleas for justice for two long weeks, but you answered us loud and clear on Tuesday October 20th. Without any avoidance of doubt, we heard you clearly, Mr. President.

The events of October 20th have been documented in several ways since then, and we have noted how truths, half-truths and falsities have been mixed together in the days following the 20th. However, what seems clear so far is that you chose to ignore the cries of your citizens and you presided over a systematic dispersal of innocent Nigerians with bullets when they approached with nothing more than the National Flag and the National Anthem. Mr. President, you violated the terms of the oath of office which you swore, to “discharge your duties to the best of your ability … always in the interest of the well-being and prosperity of the Federal Republic of Nigeria”, that you will “do right to all manner of people”, and that you will “devote yourself to the service and well-being of the people of Nigeria”. Mr. President, I wonder if those words actually meant anything to you.

We know that you are the Commander-in-Chief of the Nigerian armed forces, and we know that you have the authority to mobilize the army. We also know that the army does not operate without clear instructions. Mr. President, who gave the order for members of the Nigerian army to attack innocent civilians at the Lekki Toll Gate in the evening of October 20th? You owe Nigerians this one explanation. Mr. President, the buck stops at your table, and history right now records that you presided over the killing of your citizens, and you proceeded to threaten them in your distasteful speech afterwards. You acted neither like an elder, a Nigerian statesman or a President.

When I read the transcript of your speech (because I could not bring myself to listen to your voice), I was absolutely ashamed that you are the one who occupies the office of President of the Federal Republic of Nigeria. Without properly acknowledging the loss of innocent lives at the hands of your armed forces, you spoke as though you were sorry that you acted with promptness in accepting our demands. The only sign of weakness that was on display was your ineptitude in your public response. It was shameful to see that you were more concerned about listing your government’s fledgling economic empowerment initiatives when the subject of discussion was police violence. You had a chance to demonstrate that you care and you did not take it.

Be assured, Mr. President, that the citizens whom you have ignored today will not keep quiet forever. We will be back. We will re-strategize and we will resume our demands for good governance in our country, because the country belongs to all of us. We will not allow you to discourage us or diminish our enthusiasm. This is beyond you, Mr. President. You have always appeared to be inconvenienced by the expectation that you should speak to your citizens, so we henceforth expect no words from you. But be assured that we are going nowhere. Nigeria will be great in our lifetime, with or without you. This much we will ensure, for ourselves and for the generations coming behind us.

I wish you well.

previousHard Things Are Hard. But What about Willpower?
nextCharacter Matters, But That Is Just The Start