The Child Who Never Really Grew

The tale of Nigeria’s journey from June 1998 till date is like the tale of the child whose birth was heralded with joy, whose infanthood gave so much promise, whose future was as bright as the mid-day sun, but who never really outgrew his diapers. This is the very sorry tale of a sickly infant who has retained the world’s attention and kept observers with bated breath, hoping against hope that one day he would live up to his potential. As with all other things in life, patience runs out, another child is born somewhere else on the planet, the world hisses, shakes her head and moves on. Attention quickly shifts to the next child of promise. 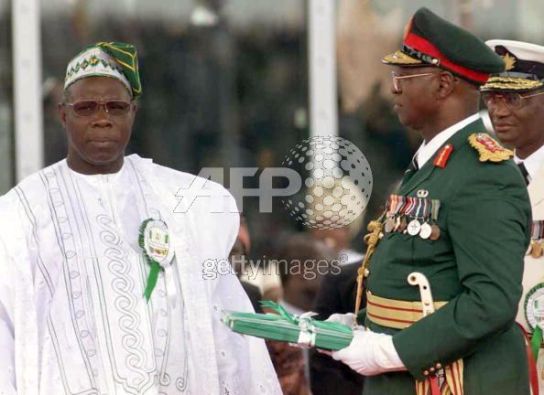 So much was predicted and expected of Nigeria as the old millennium folded up and bowed out to be replaced by the age of new beginnings. Nigeria’s forgettable years spent in military backwardness were heartily dismissed as the worst we could ever do, as we celebrated General Abdulsalami Abubakar’s statesmanship and resolve to return Nigeria to democracy. The world was lousily warned that Africa’s giant was about to roar into life and finally claim her place as the leader of all black innovation. Olusegun Obasanjo was philanthropically rewarded with the presidency for his prison years and supposed wisdom, and gracefully welcomed back into the world of the civilized as the chosen one; the one who would wipe all tears away from weary Nigerian eyes and crown them with a diadem of honour. Thirteen years down the line, the centre is refusing to hold.

What happened? Did Nigeria over-promise and under-deliver, or was the world too expectant? Were there insufficient speeches at the United Nations or a shortage of ‘foreign investors’ from China, Brazil or Qatar? Were there limited cabinet positions or too few administrative reshuffles that prevented change-makers from having a shot at introducing change? Were there inadequate political positions for friends, associates, acquaintances and distant relatives of (s)elected officials? Were there too few foreign trips to ‘observe how things are done abroad’? Did the presidents of other countries not visit to sign partnerships, contracts, Memoranda of Understanding, shake hands, sanction bi-national commissions or give major speeches? Did we not have enough governors, legislators, wives of local government chairmen, senior special advisers and ‘captains of industry’ on our delegations to the UN General Assembly or G-20 summits? What exactly did we fail to do?

We observed the appointments of all sorts of phony magicians to cabinet positions, we endured the endless blast of sirens whenever the special assistant to the Minister of Solid Minerals visited Ibarapa Local Government Area, we gullibly believed the endless promises of solutions to the crippled state of power generation in the country, we rejoiced whenever a culprit was fingered in a money-laundering scam but hissed furiously when the Supreme Court dismissed all charges against him because they could not be substantiated, we sympathised with organized labour whenever they declared a national strike to protest the non-implementation of the minimum wage and shook our heads pitifully when a compromise was hastily reached without the meagre wages being paid. We have had our hopes built, dashed, shattered and then raised again because we are Nigerians and we don’t give up. We know that God has not forgotten us and that there is still hope for us in the future.

We know that even though South Africa found her feet in 1994 with the election of a serious revolutionary and has refused to look back ever since, there is nothing to worry about because we’re still building our democracy. We know that even though Ghanaians shamefully packed all their belongings from our country just a couple decades ago and endured our jeers at their ‘useless’ currency while they slowly rebuilt their economy, there isn’t much cause for alarm because they still allow us to visit their country on excursion and their ex-presidents do not reject us when we invite them to lecture us on national development. We know that even though we did not endure anything close to the genocide that wiped away more than a million citizens of Rwanda eighteen years ago, the fact that the Rwandan president is now the global face of the rising African continent does not mean our president is also not respected. At least, he can afford to fly two presidential jets to New York whenever he has a very important speech to deliver to the rest of the world.

There really is no problem in Nigeria as long as a few of us are able to secure scholarships to study in foreign universities, even if the destination is Lithuania or Equatorial Guinea; at least we’re studying abroad. Nigeria is not doing badly as long as we have the largest black population of Facebook and Twitter users; isn’t that something to be proud of? We have not forgotten the fact that John Mikel Obi has a starting shirt at Chelsea Football Club, even though he is probably the only Nigerian who is a regular first-team player in any club in Europe. For crying out loud, at least we won a few Paralympic medals in London, making up for the dismal performance of the able-bodied Olympic athletes who cannot be blamed because funds were released for their training only four months to the Olympics. Furthermore, the U-21 female national team performed quite well at the just concluded World Cup. Don’t we have enough to celebrate?

As we witness stunted growth and celebrate mediocre achievements while the rest of the continent progresses, there seems to be a growing sense of curious calm in a raging storm. Social media guarantees a safe haven for a new generation of political commentators to vent their frustrations and move on as quickly as they make an angry post. The impending 52nd commemoration of the country’s Independence Day doesn’t give much promise about potential developments as citizens satisfy themselves with the awareness of the current president’s failures. It really doesn’t feel utterly shameful anymore to realize that the 13-year old toddler called Nigerian democracy doesn’t even crawl or suck his fingers anymore; that he seems to be grinding to a full stop in his expected growth. Who knows if this sickly child would ever get out of his diapers, eat some real food and learn to clean up after himself? Who knows if he even has a future ambition?

previousBeauty of the Dark Continent
nextThe Law is still an Ass