It feels like several millennia ago since Nigerians were touted to be the happiest people on earth. We took pride in the fact that in spite of economic hardships, we always found a way to maintain a colourful national spirit through our sports, music, festivals, local merchandise and every other source of national pleasure that we could muster. Forget the recent UN survey on national moods which ranks Nigerians as the 100th happiest people in the world, Nigerians are even less happy than people think.

Yes, we smile through turmoil, we persevere through hardship and we encourage others through our own discouragements, but deep down in us, there is a huge well of frustration based on the direction in which the country is headed. We’ve been through unthinkable situations and we’ve maintained hope, but these days, hope seems to be a more painful than helpful emotion to cultivate.

Our first grouse as Nigerians is with our politics. We know that there is no perfect government in the world and we acknowledge that government cannot do everything for us, but we find it hard to believe that government cannot do ANYTHING for us either. Now more than ever, Nigerians seem to be finally giving up on the capacity of government to provide basic social needs and security for the people, which is the least a government can guarantee. Every public official who takes an oath purportedly does so in the interest of the general public, not his private concerns, but the speed with which those oaths are violated is unimaginable. We believe our politicians when they claim to be honestly touched by our conditions during campaign speeches, but when we contrast their physical sizes, wardrobe sizes and other material possessions with ours after mere months in office, we are justified to believe that we’re pursuing different interests. Nigerian politicians are clearly living in an alternate universe.

Alongside our politics, we are severely disillusioned with the state of governance in our country. We might be answerable for voting public officials based on religious, cultural and other sentiments, but we can’t find any explanations for the inhuman treatments which they mete out to us time after time. We can’t understand how our president claims to know the sponsors of terrorist activities in the north, and yet issue a tailor-made response to the loss of several lives every given Sunday. We don’t know what to think when our president, who swore to protect us, claims to be “saddened” by the avoidable slaughter of innocent citizens who harmlessly seek to worship their God. Anyone can be saddened, indeed everyone is saddened, but everyone didn’t swear the oath to preserve and protect the constitution of the country; everyone didn’t receive the overall command of the nation’s armed forces to be deployed for the safety of all citizens; and more frustratingly, everyone isn’t receiving the fat compensation for a job that is not being done.

While we express our dissatisfaction with the eggheads in Abuja for failing to convince us of their interest in our welfare, we are even more disgruntled by their inability to apply common reason to their daily activities. 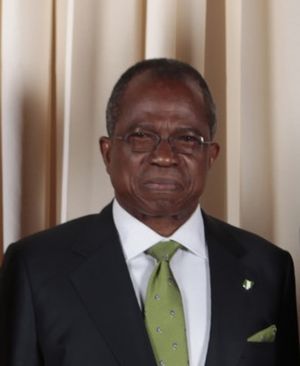 For instance, we cannot seem to understand why for the umpteenth time, Mr Ojo Maduekwe has been appointed to a position in government. After serving as Minister of Culture and Tourism, and then Minister of Transport under President Obasanjo, he served as national secretary of the PDP, he was appointed Minister of Foreign Affairs under President Yar’Adua, was nominated for the position of Secretary to the Government of the Federation, and has now been appointed an Ambassador to Canada. How valuable is this single individual to Nigeria that he seems to be recycled for every available position in the country? We understand that Bianca Ojukwu earned her ambassadorship to Spain because of the urgent need to compensate her late husband for his grossly under-appreciated service to the country, but how about Taofeek Arapaja? What’s his claim to fame? Trusted thug of the late Lamidi Adedibu? Is that enough? What happened to foreign policy expertise? How do we send someone to be the representative of the President; the face of 150 million people in a strange land when they have no track record of achievement beyond their local government? Why do we ALWAYS get it wrong in Nigeria?

Furthermore, now that we have completely forgotten about the Dana Air crash, just like the Sosoliso, Bellview and Chanchangi crashes before it, the families of the deceased are left to suffer the effects of their losses for the rest of time. Would we ever see the report of the probe committee? Would the committee ever do anything? How much will be required for the committee to quietly delete the names of the culprits? How soon until we’re jolted to our senses again by another avoidable mishap? We quickly forget that calamities like the Dana crash are mere manifestations of a much deeper rot in our system; problems which will never go away unless firmly addressed. We have perfected the art of cutting corners and addressing only the visible symptoms of our deep-seated challenges, and this has not served us well ever and it would not suffice in the future.

Every sector of the Nigerian economy is compromised, but the average citizen has no clue. Cecilia Ibru and Ndi Okereke-Onyuike were sparkling examples of how hard work could lead any woman to success, until ‘hard work’ was redefined to mean sharp corrupt practices. Erastus Akingbola was a top role model for everyone in the country; managing a successful bank, donating a hostel block to the University of Lagos, publishing a Christian devotional, and pioneering an ‘inspiration’ radio station, until his antics were exposed.

Dimeji Bankole was the ultimate image of the place of the young Nigerian in a failed political system; his rise to the pinnacle of legislative authority in the country seemed to prove that intelligent and articulate young Nigerians could indeed steer the country’s ship to a desirable future, but then he crumbled like a pack of cards and sent our hopes flying yet again.

Now that Farouk Lawan and Femi Otedola have chosen to embarrass themselves needlessly, our endless search for scarce role models in a crooked society suffers another setback. The straight-talking short-man-devil was regarded as one of the very few incorruptible members of the Nigerian legislature and was perceived as a shining light in our country’s dark chamber of secrets. Now, we know better: TRUST NO NIGERIAN POLITICIAN. We can safely assume that even those who invoke the Lord’s name from their sleep are harbouring very huge skeletons in their cupboards, and the best way to protect ourselves from repeated heartbreak is to assume that every Nigerian politician is a criminal waiting to be revealed. Femi Otedola has always appeared to be a slimy businessman and whether he is culpable in the fuel subsidy scam or not, he would have to do a lot to establish his credibility. But then, which Nigerian billionaire is credible? Which one of them does not dictate the play of Nigerian politics as it pleases them? Who can we trust?

The entire country seems to be a theatre of calamities; every street corner seems to have a disaster waiting to happen. The stage is set all over for increased disappointment and while it will please us all to flee the country and never turn back, we realistically cannot do that. There will always be a very large group of us who would never have the good fortune to take even a temporary trip outside the country; and most of us would live the rest of our lives on Nigerian soil. The question is “how do we insulate ourselves against everything negative that Nigeria continues to breed? And how can we help to alter the realities of our existence? Is it really possible for any form of change to come to the Nigerian government? What is required? How do we get started? Who will lead this revolution? The very sound of these questions gives a dizzying sensation; there seems no hope in sight. National morale is at an all-time low. Which way forward, Nigeria?

4 thoughts on “Theater of Calamities”