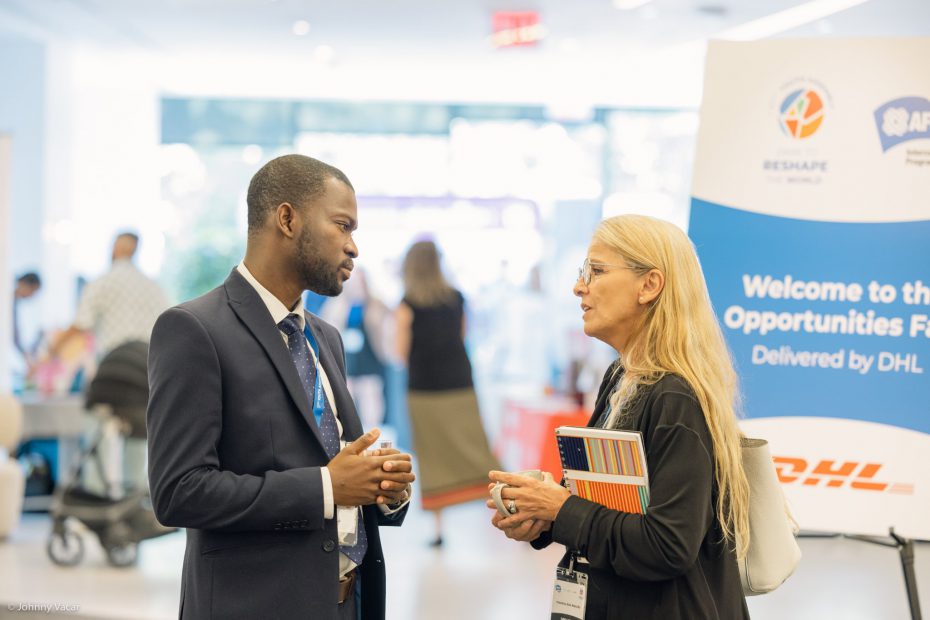 This is the text of my opening presentation on the panel titled “Transforming Education for All” at the 27th Youth Assembly in New York on 13th August 2022.

Good morning, and thank you all so much for the kind invitation to be here and to join esteemed colleagues in exchanging ideas about the potential for transforming education for all.

A lot of what you will hear at this Assembly today and other forums at a time like this is that the last two years and a bit have been very rough for everyone and we’ve lost some real momentum in advancing the course of education globally. We’ve been dealing with a pandemic, a war, economic downturn and a general loss of hope in the world. At the top of my mind, I’m wondering if there has been a time in recent history when the world has faced these exact same conditions (a pandemic, a war, economic downturn and a loss of hope in the world) and if anyone – any young person – might have done anything at that time to advance the cause of quality education, especially one that incorporated participatory learning about real-world events.

Sometimes the best way to imagine the future is to look to the past for inspiration, so let me quickly take you back just over 100 years ago. From 1914-1918, the world was embroiled in the first World War – 20 million people died and 21 million were wounded; and right afterwards from 1918-1920, the world was hit by the Great Influenza Pandemic (unfortunately known as the Spanish flu pandemic) – an estimated 500 million people worldwide were infected – that’s one third of the entire planet: close to 50 million people were killed. As though that weren’t enough, what came next was the great depression that lasted until 1939. If you think life is bleak now, for 25 years, life was very bleak then.

But the question is: did any young person do anything to alter the course of education in the world during this grim period of human history? Best believe the answer is yes! As a young man in his twenties during the first World War, Kurt Hahn joined the German Department for Foreign Affairs where his role was to analyse British newspapers and to advise the Foreign Office. As a result of this, in 1919, he was part of the German delegation to the Paris Peace Conference where he witnessed the creation of the Treaty of Versailles. I believe that it was as a result of having this front row seat to the challenging realities of his day that Kurt Hahn was moved to establish Salem School in Germany where the curriculum revolved around practical service to society. But was there an opportunity for Kurt Hahn to really expose his students to real-world events such as the ones that inspired him to establish the school? The answer is yes!

When Hitler rose to power, a group of Nazi stormtroopers attacked and killed a young man in front of his mother in broad daylight. They were sentenced to death, but Hitler personally wrote to encourage them and inevitably they were released from prison and given a hero’s welcome back into society by fellow Nazis. Kurt Hahn was appalled; he spoke out publicly against Hitler but he did not stop there – he challenged his students, his faculty and alumni of Salem School to publicly take a stand – to declare which values they would choose to live by – the values of Hitler or the values of Salem School.

That was an unprecedented action by a young man, and inevitably he was imprisoned and then exiled. It was in exile that his true influence reached the world and changed the face of education forever – he founded and influenced the establishment of institutions such as Gordonstoun, the Outward Bound movement, the Duke of Edinburgh’s Award, Round Square group of schools, the International Baccalaureate, the United World Colleges which I am privileged to serve and to lead, and the International School Ibadan which I would eventually attend as a student.

So, what are the takeaways about how young people can join efforts to transform education and how education systems can better incorporate real-world participatory learning? From the example of Hurt Hahn, if you are a young person, three things are clear:

And for education systems, three things as well:

I look forward to expanding on these thoughts further.

Thank you very much.

previousAre We Under Water Yet? The Climate Crisis is Real