Only a few weeks ago, President Goodluck Jonathan made a very difficult decision by his own standards and hosted a media chat, where he fielded questions from members of the national media and attempted to address some of the concerns of the Nigerian people. Whether or not he really answered any questions at all remains a debated issue, but he made one point clear: he doesn’t believe he is being treated with respect by Nigerians. He thinks that Nigerians like to insult him because it is a fashionable thing to do and it is a quick way to generate attention; none of which fazes him. Jonathan is not alone in this reverie; past and present Nigerian politicians have complained of disrespect from the Nigerian people, and even ordinary citizens have joined the clamour for more decorum when the names of politicians are included in national discourse. However, if Nigeria is to move forward, respect must be a two-way street. The famous saying that ‘respect begets respect’ holds true all over the world, and it must become reality in Nigeria.

Mutual respect, quite understandably, is not a Nigerian concept; children are brought up across the country to understand that they are answerable to their parents and never vice versa. From childhood, Nigerians are taught to never look in the eyes of adults when they are being rebuked, to never retort when they are being reprimanded and to never complain against constituted authority. This cultural phenomenon has played out on the national stage, with politicians assuming the roles of overbearing parents whose authority must never be questioned. Conventional knowledge about mutual respect dictates that there will be constant communication between parties, non-negotiable total honesty, a commitment to not wilfully harm the other party, and always seeking the interest of the other. These much-desired traits are some of the scarcest in Nigeria, especially between politicians and citizens, and as much as they detest it, politicians will always be subject to endless vituperation from the people unless the tides change.

For too long, Nigerians have been insulted and disrespected by elected officials, while they continue to trust God for changes and believe that there will be improvements over time. No, there would never be improvements over time! Things do not change by wishful thinking, things change when individuals take definite action. When politicians declare unbelievably exorbitant salaries and allowances for themselves, and constantly review them with the turn of successive legislative tenures, while struggling to debate, approve and implement minimum wages for people who slave away at government agencies, that is utter disrespect to the people. Minimum wage bills are always the slowest to pass through the Federal House of Representatives, and even when they do, state governors would declare their states broke and unable to fund such increases; yet those same governors find it very convenient to embark on endless trips to foreign lands at the expense of their citizens. 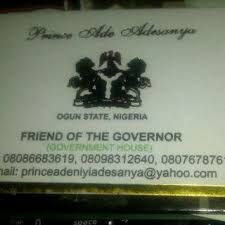 Nigerians are grossly disrespected when elected officials appoint all their unqualified friends and acquaintances to technical positions in government, and then end up with advisers, special advisers, executive assistants and senior special advisers to a state governor on ‘disability matters’. Of course, every governor should make plans to address disability matters in their states, but do four separate individuals with several secretaries and staffers need to live large on the state budget because the governor intends to assist physically challenged citizens? Even more insulting is the fact that politicians appoint their cronies to such ill-advised offices as ‘adviser on political matters’, ‘special adviser on internal integration’, ‘senior special assistant on accountability’, and the most insulting of all – ‘friend of the governor’. What manner of political office is that of the ‘friend of the governor’? It is extremely shameful that elected officials perpetrate such acts of stupidity, but it is even more shameful that Nigerians allow such despicable actions to stand.

Another flagrant demonstration of disrespect to Nigerians is the frequent abuse of public office by politicians who orchestrate the weddings of their sons and daughters to coincide with their tenures in office. During his ill-fated three-year tenure, two of President Yar’Adua’s daughters got married in arguably the most lavish ceremonies ever hosted in Aso Rock. This trend is not uncommon to state governors and federal legislators who seize the benefit of the national spotlight to trade their daughters for wealthy suitors and to receive generous gifts in exchange for government contracts. These same politicians repeatedly insult the citizens from whom they are stealing with noisy sirens and extensive motorcades to further drive the wedge between them and the citizens whom they pretend to serve. What a generation of vipers!

During political campaigns, Nigerian politicians have continually exploited the docility of citizens to run extensive 24-month campaigns without visible agenda. Very rarely does an aspirant to the federal legislature or state government houses issue their strategies for addressing social issues in their constituencies, aside erecting gigantic billboards with their huge faces and their names and traditional titles in very bold print, while sneaking “accountability, transparency and progress” somewhere in a corner.

How on earth does that suffice for an agenda? Political campaigns have always been run in Nigeria based on the clout and financial strength of sponsors and never on the qualifications of aspirants. Political debates are rarely organized, and when they are, aspirants decide to boycott them without implications, because they are perceived to be avenues for embarrassing unintelligent politicians. Well, politicians who have nothing to hide, and who are eager to demonstrate their qualification and readiness to their constituents would never miss an opportunity to meet with their constituents and assure them of their preparedness to serve them. Failure to do this is nothing but disrespect to the people.

When asked about the plan for constant power generation in the country in the course of the media chat, President Jonathan brazenly expressed disappointment at Nigerians for complaining about poor power supply when their counterparts in India merely light candles and continue their duties in the events of power outages. How more disrespectful could a president be to his own citizens? Having siphoned so much of the nation’s resources on pointless trips around the world, travelling with over 200 aides on each occasion, he still finds the audacity to insult the long-suffering citizens who plead for crumbs of electricity from his table? It is a huge shame on the man who claimed to have walked without shoes in childhood, but it is even more shameful that there are still Nigerians who see him as a God-sent messiah. The disrespect that the president has shown to the people is further evidenced by the multiplication of committees in his government, including committees to probe non-functional committees, none of which has produced a comprehensive report that can be viewed by the people, or whose resolutions have been knowingly adopted to change the status quo.

Evidently, Nigerians have never been confident of the capacity of their elected officials to solve any of the challenges that plague them, but they find it more disturbing that the government is equally unable to stand up to private enterprises that make life unbearable for them. The major telecommunications firms in Nigeria have always been blood-sucking agencies, as are the Power Holding Company of Nigeria, and all arms of the Dangote franchise which have monopolized the production of almost all household items in the country. Granted, Aliko Dangote is a business man who has utilized his business acumen to enrich himself and employ a handful of Nigerians, but it is not the place of the Nigerian president to endow him with the second highest honour in the land (GCON) and to claim that the country is still not doing enough to protect the man who rose to the 76th position on Forbes’ list of richest people in the world with unfair trading practices at the expense of 162 million people. The same president found the audacity to address the nation and claim that Wale Babalakin’s legal expertise is the sole reason behind the stalling of the reconstruction of the nation’s primary highway that claims hundreds of lives almost weekly. This is an insult to the several millions of hardworking Nigerians who never get any recognition for their investments in the nation; total disrespect to every single one of us!

Perhaps the peak of disrespect that has been shown to Nigerians in recent times, ignoring the mindless appointment of the president’s wife to a bureaucratic position in Bayelsa state by an overly grateful political godson, has been the quotation of the national constitution by the Minister of Youth Development to justify the deployment of National Youth Service Corps members to the gates of hell (heaven) in the north. A government that has failed to prosecute political criminals who are always found ‘not guilty’ by our politicized legal system, a government that has failed to deliver on the promised reforms in the power sector and in education, and a government that constantly recycles thieving politicians in significant offices is not one that can be trusted. Both the Minister and the president would have their hands drenched in blood if evil befalls any corps member in the new deployment. We would never move forward as a country if politicians fail to treat citizens with respect, while expecting already subservient people to spread their clothes and bodies for them to trample on. Enough is enough; Nigerians have gullibly pandered to the wishes of the ruling class for too long. If things would ever change, the future of the country will depend on a principle of non-negotiable respect, first to the people.